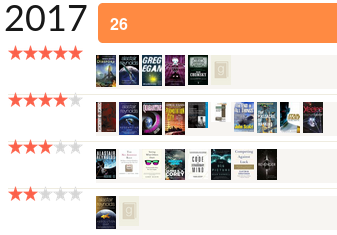 In 2017 I did an effort to rate books properly using the Goodreads scale (Did not like, it was OK, I liked it, I really liked it, it was amawzing), hence the books are more distributed rating wise than the previous years, where most got 4 stars.

While only finished shortly after new year and thus not strictly a 2017 book even though I read 90% of it in 2017, my favorite for the year is The Righteous Mind: Why Good People are Divided by Politics and Religion. A few months ago I saw an interview of Jonathan Haidt, the author of this book. I was so impressed that I went look for books written by him. As I was about to add his most recent work (this book) to my to-read list on Goodreads, I realized that it was already on there, added a few months before. The book is about social and moral psychology and taught me many useful models in how people behave, where to look for ones blind spots, how to avoid polarization and how to understand many aspects of the political landscape. A highly recommended read!

Another non-fiction book that I found to be full of useful models that deepened my understanding of how the world works is The Psychopath Code: Cracking The Predators That Stalk Us. Since about 4% of people are psychopaths and thus systematically and mercilessly exploit others (while being very good at covering their tracks), you are almost guaranteed to significantly interact with some over the course of your life. Hence understanding how to detect them and prevent them from feeding on you or those you care about is an important skill. You can check out my highlights from the book to get a quick idea of the contents.

After having read a number of more mainstream Science Fiction books that do not empathize on the science or grand ideas as proper Hard Science Fiction, I picked up Incandescence, by Greg Egan, author of one of my 2015 favorite books. As expected from Greg Egan, the focus definitely is on the science and the ideas. The story is set in the The Amalgam galaxy, which I was already familiar with via a number of short stories.

Most of the book deals with a more primitive civilization discovering gradually discovering physics starting from scratch, both using observation and theorization, and eventually creating their own version of General Relativity. Following this is made extra challenging by the individuals in this civilization using their own terms for various concepts, such as the 6 different spatial directions. You can see this is not your usual SF book from this… different trailer that Greg made.

What is so great about this book is that Greg does not explain what is going on. He gradually drops clues that allow you to piece by piece get a better understanding of the situation, and how the story of the primitive civilization fits the wider context. For instance, you find out what “the Incandescence” is. At least you will if you are familiar with the relevant “space stuff”. While in this case it is hard to miss if you know the “space stuff”, the hints are never really confirmed. This is also true for perhaps the most important hinted at thing. I had a “Holy shit! Could it be… this is epic” moment when I made that connection.

Not a book I would recommend for people new to Hard SF, or the best book of Egan to start with. In any case, before reading this one, read some of the stories of The Amalgam.

Since I linked Incandescence so much I decided to finally give Diaspora a go. Diaspora had been on my to-read list for years and I never got to it because of its low rating on Goodreads. (Rant: Paying so much attention to the rating was perhaps not so smart of me, since for non-mainstream the ratings are not very telling. They mainly seem to be a combination of what average people expect and what is popular, with less correlation to quality and a punishing of material that is too sophisticated for the uninitiated or less intelligent.)

I loved the first chapter of Diaspora “Orphanogenesis” and cried some tears of joy at its conclusion.

The final chapters are epic. Spoiler ahead. How can a structure spanning 200 trillion universes and encoding the thoughts of an entire civilization be anything but epic? This beats the Xeelee ring in scale. The choices of some of the characters near the end make little sense to me, though still a great book overall, and perhaps the not making sense part makes sense if one considers how much these characters are not traditional humans.

1 thought on “My year in books”