I’ve read a total of 44 books,  though some of these are short stories and might not actually quality as book. This adds up to about 6714 pages, compared to the 6396 from the year before. My average rating was 3.8 out of 5, with the following distribution:

The vast majority of books I read during this period where published after the year 2000, with only 2 books on or before 1990. 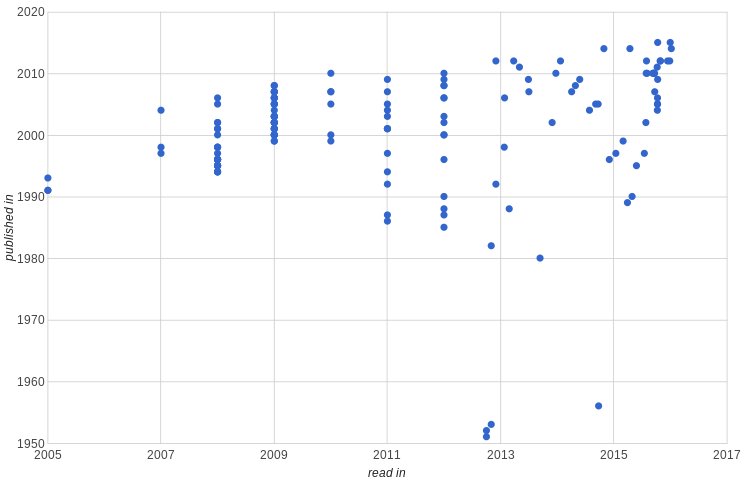 I read 3 series of books.

Firstly I finished reading The Night’s Dawn trilogy by Peter F Hamilton which I had started with the year before. I was a bit surprised by the whole space zombie theme, though certainly enjoyed all three books. After all, a tale featuring Al Capone returning from the dead, gaining super powers, and running a mob that takes over multiple stellar systems has to be good right?

Secondly I finally got to reading Hyperion, and proceeded to read the whole Hyperion Cantos. I loved the first book for the way it jumps back and forth in an ad hock manner to dozens of different places in the timeline and universe, and does so smoothly and sensibly. It also includes a number of interesting concepts, that while often also covered in more recent works, must have been quite original at the time. The last two books in the cantos, Endymion and The Rise of Endymion I did not like quite as much. The lack the awesome structure of the first novel and do not introduce as many new concepts. Still, they are good books.

Thirdly and lastly I started readying the Infinity Project books, which form a hard science fiction short story anthology series. Or rather, that is how it is marketed. While some of the stories definitely quality as hard science fiction, others do not, with the occasional one not qualifying as science fiction at all. In 2015 I’ve read the first two books, Engineering Infinity and Edge of Infinity. I’ve also started with the third one, Reach for Infinity, which I hope will be better than Edge of Infinity, which contained quite some stories I did not enjoy that much. The stories I enjoyed most are Malek by Peter Watts and The Server and the Dragon by Hannu Rajaniemi. Both books have an AI as main character, which seems to be a theme given that amongst my most favorite books are Excession and Sunstorm.

Schild’s Ladder is a novel that deserves a mention on its own. This is a beautiful work of hard science fiction that someone recommended me as being “almost as epic in scale as the Xeelee Sequence“. It’s a story of an experiment going wrong and creating a false vacuum collapse, or put simply, a kind of explosion spreading out at half the speed of light, continuing on forever, and destroying everything in its path. I’ve seen a similar idea before (spoiler!) at the end of Manifold: Time, another of my favorite novels. There is was only mentioned briefly and not looked at in detail, as Schild’s Ladder does. At the end of the book I was a bit surprised and disappointed it ended, as I had been lead along an awesome journey introducing an existing new world, and then did not get to see more details or what would happen with it. Signs of a good book 🙂

I’ve created several dozens quotes of lines or paragraphs I particularly liked, which I’ll be posting soon in another blog post.

4 thoughts on “My year in books”