This is a short summary of my 2016 reading experience, following my 2015 Year In Books.

My favorites for 2016 are without a doubt Blindsight and Echopraxia by Peter Watts. I got to know Watts, who is now in my short list of favorite authors, through the short story Malek, which I mentioned in my 2015 year in books. I can’t describe the books in a way that does them sufficient justice, but suffice to say that they explore a good number of interesting questions and concepts. Exactly what you (or at least I) want from Hard (character) Science Fiction.

You can haz a video with Peter Watts reading a short excerpt from Echopraxia at the Canada Privacy Symposium. You can also get a feel from these books based on their quotes: Blindsight quotes, Echopraxia quotes. Or simply read Malek 🙂 Though Malek does not have OP space vampires that are seriously OP.

My favorite non-fiction book for the year is Thinking Fast and Slow, which is crammed full with information useful to anyone who wants to better understand how their (or others) mind works, where it tends to go off the rails, and what can be done about those cases. The number two slot goes to Domain-Driven Design Distilled, which unlike the red and blue books is actually somewhat readable.

My favorite short story was Crystal Nights by Greg Egan. It explores the creation of something akin to strong AI via simulated evolution, including various ethical and moral questions this raises. It does not start with a tetravalent graph more like diamond than graphite, but you can’t have everything now can you?

All books I read, except for 2 short stories, where published earliest in the year 2000. 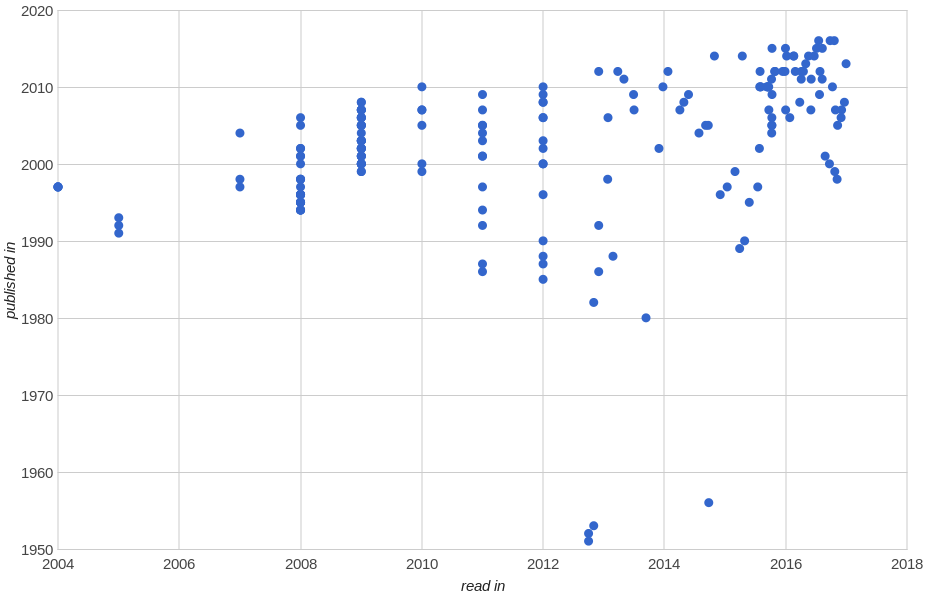 For 2016 I set a reading goal of 21 books, to beat Lydia‘s 20. She ended up reading 44, so beat me. However, she used OP audio book hax. I attempted this as well but did not manage to catch up, even though I racked up 11.5 days worth of listening time. This year I will win of course. (Plan B)

As you might be able to deduce from the read in vs published in chart, I went through a number of series. I read all The Expanse novels after watching the first season of the television series based on them. Similarly I read the Old Man’s War novels except the last one, which I have not finished yet. Both series are fun, though they might not live up to the expectations of fellow Hard Science Fiction master race members, as they are geared more towards plain SF plebs. Finally I started with the Revelation Space books by Alastair Reynolds after reading House of Suns, which has been on my reading list since forever. This was also high time since clearly I need to have read all the books from authors that have been in a Google hangout with Special Circumstances agent Ian M. Banks.

2 thoughts on “My year in books”