I’m happy to announce the release of a new MediaWiki extension I’ve been working on over the past two weeks. It’s titled Live Translate and allows live page translation via the Google Translate API. It also enables you to define a “dictionary” of certain words or phrases and their translations; any word or phrase in the original text found in the “dictionary” will be translated using that dictionary, instead of using Google Translate.

The main features are:

A wiki page with the translation control of the Live Translate extension at the right top corner: 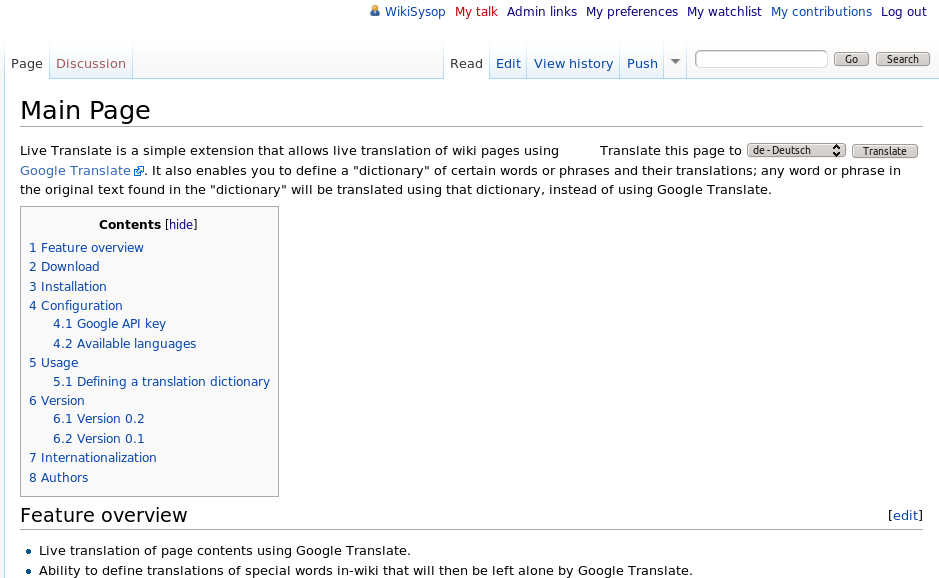 The same page after translating it to Dutch: 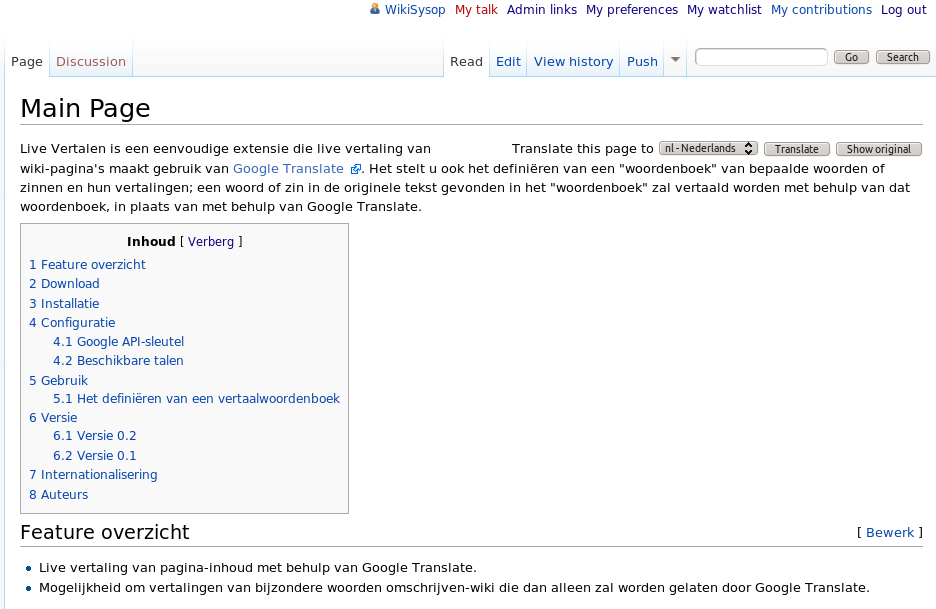 The dictionary page briefly summarizing how many words and languages it contains:

Editing the special words dictionary works just like editing any other page:

I created this extension as WikiWorks consultant for Texas Instruments. Thanks to TI for funding this and allowing licensing under the GNU GPL.

For me the most interesting part of creating this extension was figuring out how to walk through the page DOM and send only the actual text to the Google Translate API using JavaScript (and jQuery). This step was needed because the GT API limits translation requests to 500 characters, so it’s not definitely possible to send the whole page. It took me a while to figure this out, and I still think it’s a rather lame limit, as it leads to loss of context, and thus worse translations.

Ah, and not to forgot, I used a XOR. I kid you not, source code or it didn’t happen (see the last function).

Live Translate is currently at version 0.2 and contains all the features initially requested by TI. It appears to be stable, and ready for production usage. Of course, if bugs pop up, they will be addressed and a new minor version will be released. A cool new feature I’ve been considering, and might add at some point, is having __LIVETRANSLATE__ and __NOLIVETRANSLATE__ magic words, that allow per-page showing or hiding of the translation control. Yaron suggested also having a per-namespace setting. If you have some cool new features in mind, feel free to suggest them on the Live Translate discussion page (where you also can ask for support and point out bugs). If you want to fund any new functionality, please contact WikiWorks.

You can obtain the latest version of Live Translate here.

I’m happy to announce the release of a new MediaWiki extension I’ve been working on over the past two weeks.
Post Views: 5,125