Since my last blog post about my GSoC project, which aims to bring more awesome deployment capabilities to MediaWiki, I’ve been putting my time into both the Distribution and Deployment extensions. I was pleased to find a bunch of stuff was easier to do then I had imagined, and now I finally have some functionality you can actually see working – yay 🙂 It’s not a lot, as this is just very rudimentary and even uses demo data at places. Still it’s very nice to be able to post some screenshots after months of doing research and poking at code. I also got a new crappy diagram (although I think I’m succeeding in getting them less crappy each iteration) that shows the architecture of the initial versions I’m working towards.

The following screenshots show an import script running. This script is part of Distribution and is meant to get data from a checked out copy of the extensions directory and store it into the database tables provided by Distribution. I haven’t found a good way to actually get the extension data other then their path names (for example ‘SemanticMediaWiki’), so have a function that’s just returning some demo data.

Via Deployment you can search for extensions by keyword, author or tag. This is done by making a request to the API provided by Distribution which serves the data collected by the script. This screenshot shows the interface I have created so far:

And after clicking the button, you get: 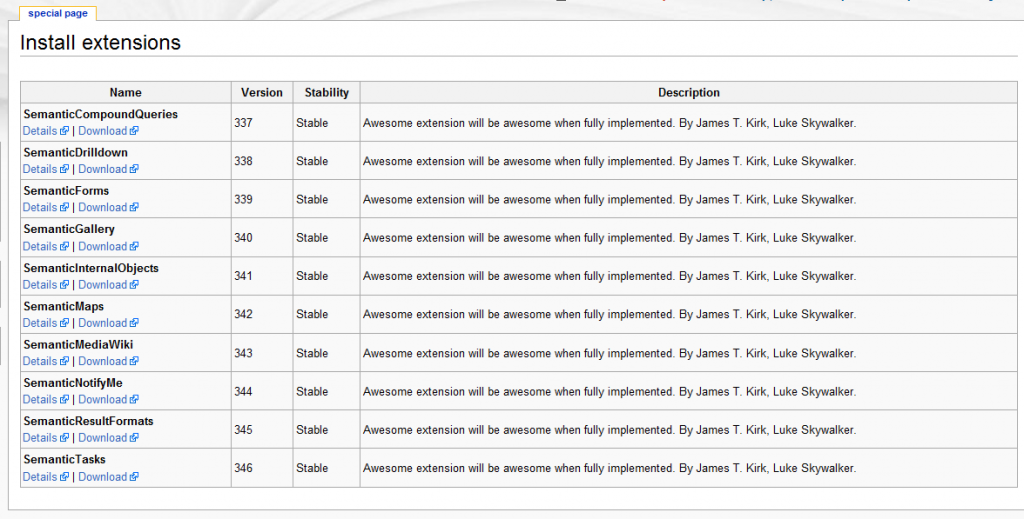 As I’m doing with all special pages in Deployment, Special:Install’s layout and functionality is based on what WordPress has in it’s admin panel.

I also put some work in Special:Extensions already, although it’s basically just Special:Version with just the extensions for now.

I’m not wring a real comprehensive overview of what features there are already, which are planned, and how I plan to create them for now, as there is little time left in GSoC (only 3 days!), and I want to get some more work finished before then 🙂

1 thought on “Visible awesomeness at last”